Hong Kong’s egg tarts pack a whole lot of history into just a couple of bites. These flavoursome pastries owe their existence to both the Portuguese Pastéis de Belém and the British custard tart. They represent a fusion of culture and cuisine that is uniquely Hong Kong.

We begin our culinary journey in 19th century Portugal, in the Jerónimos Monastery in the Lisbon district of Belém. The monks were in the habit of baking tiny custard tarts. A mix of sugar, flour and egg yolk caramelised in the oven to create their distinctive appearance and delicious taste. A few decades later, a small factory opened next door and the recipe was handed down from generation to generation. Then, as now, queues formed around the block. Locals and visitors alike were keen to savour the sweet creamy filling and rich crumbly pastry. From 1557 to 1999, Macau was a Portuguese colony. It was no surprise that egg tarts leaped from Europe to Asia too. 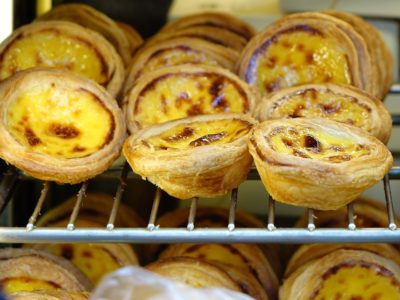 Fast forward to the 1940s and 1950s, there was an influx of immigration into nearby Hong Kong from mainland China. Many migrants came from nearby Guangzhou, a populous city to the north east of Hong Kong, where egg tarts were already popular. Europeans had settled in the area since the time of the First Opium war, siting their opium warehouses in Guangzhou. As settlers are prone to do, they brought with them their own cuisine. Bakeries and cafes commonly unveiled special dishes and new inventions in an attempt to win new custom. It’s generally thought that egg tarts were one such item.

Known locally as dan tat, the egg tart found in Guangzhou consisted of a shortcrust pastry base, made with lard rather than butter. Sometimes, puff pastry was used, which many people say is a more authentic Guangzhou ingredient. Inside, the filling was a rich egg custard, glossy in appearance and silky smooth on the tongue. It drew from both Portuguese and British tarts, though it wasn’t a match for either. There were variations too: coconut tarts, chocolate tarts, green tea tarts, ginger tarts and even bird’s nest tarts. However, nothing could quite equal the classic egg tart.

Influenced by its own colonial heritage, as in Guangzhou, the Hong Kong tart fused the creamy texture of the Pastéis de Belém with a British custard tart. The Hong Kong version combined the best characteristics of both tarts to make something approaching perfection. Bakers ditched the nutmeg and served the tart hot rather than cold. Egg tarts started to appear in teahouses – known as cha chaan tengs – as accompaniment to tea. Western influence was de rigueur and the pastry aimed at a wider audience. 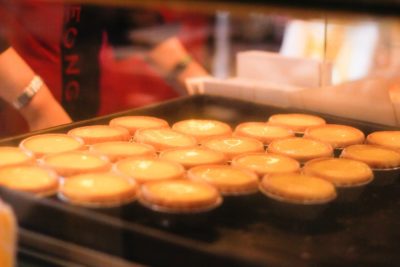 Where to go for Hong Kong Egg Tarts

One of the best places to try Hong Kong egg tarts is Tai Cheong Bakery on Lyndhurst Road in Central. The original bakery opened in 1954. This popular chain has a string of branches across Hong Kong. Among them, they produce over 30,000 tarts every single day! 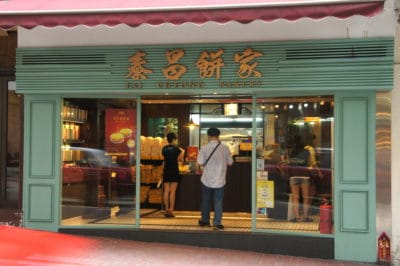 There are a plethora of places in Hong Kong serving egg tarts – they even appear on the menu at KFC! The Hoover Cake Shop in Kowloon, located at the corner of Nga Tsin Wai and Fuk Lo Tsun Roads, also wins plenty of plaudits amongst egg tart connoisseurs. Don’t expect a seat – it’s takeaway only – but do expect to wait in line before the hot, sweet tarts make it into your hands.

If you’re not planning a side trip to Macau but can’t bear the thought of missing out on one of the Portuguese-style Pastéis de Belém, then you’ll find top Macanese bakery Lord Stow at The Excelsior at Causeway Bay.

The egg tart was famously a favourite of the last British governor to Hong Kong, Chris Patten. Of course, he’s long gone, but fortunately for visitors to this iconic melting pot city, the pastries remain. Bon appétit!

Love what you’ve read? At Big Foot Tour, we love to introduce you to authentic Hong Kong food. There’s so much to choose from – egg tarts, Dim Sum, Wonton Noodles, or exotic options such as Snake Soup and Turtle Jelly. Join us on our private Hong Kong Food Tour today! Unlike a typical group tour,  we customize your itinerary around your food preferences and sense of adventure. You determine what, how much and how fast you eat! For more details, visit Big Foot Tour.

1 thought on “The History of Egg Tarts”