I have a confession to make. Many years ago, I visited Kowloon Walled City Park for the first time and thought it would offered me nothing more than a stroll in a beautiful garden. I was not looking forward to the trip, but merely tagging along with my friends. Compared to the streets across, where old buildings and memories of Kai Tak Airport remain, Kowloon Walled City Park seemed to be a place without much character.

Admittedly, I had not read up on Kowloon Walled City’s history prior to the visit. I barely knew that following British’s occupation of Hong Kong Island, China had built a big granite wall around its military base to defend itself against Britain. That was it.

That day, I took a walk around the park and saw a few historical remnants, including the Old South Gate, granite plaques with the Chinese characters for ‘South Gate” and “Kowloon Walled City”, a drainage ditch and old cannons. I wondered in my head if this was the Government’s best way to tell the story of Kowloon Walled City.

Then I saw a model, made to scale, which depicted the old Kowloon Walled City before it was demolished in year 1994. A few steps away was a small exhibition hall that shared the history and daily lives of residents of the walled city. 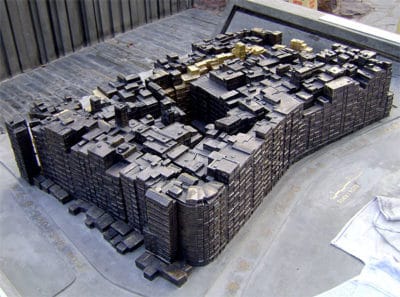 Wasn’t it an old Chinese Fort? Why were there tall buildings? Undeniably, I could not synchronized the flow of events with my then-knowledge of Hong Kong. I was missing a big part of Hong Kong history. To make matter worse, it was difficult to visualize how the scenic park today used to be the place where high-rise tenements mushroomed.

The flood of questions left me perplexed. I went home hurriedly and did my research online. Plenty of articles, images and videos later, I leaned back on my chair and took a deep breath. I was in total disbelief. 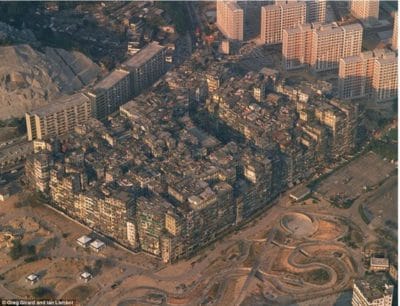 The Kowloon Walled City used to be a Chinese fort which later became an enclave when Britain leased New Territories. That said, neither China nor Britain governed the politically-sensitive area. As such, squatters grew, especially when Chinese refugees crossed the border and settled in Hong Kong. It did not take long before the walled city became one of the darkest place on earth.

By year 1987, 33,000 people lived within its 6.5-acre (0.03 km2; 0.01 sq mi) borders. There were at least 300 interconnected high-rise building, none built with the expertise of an architect. In fact, some houses were only 4 squared metres. The crazily dense area also meant that it was difficult for sunlight to reach most of the residents. There was also a lack of water supply and proper sewage system. Crimes were common and the area was particularly notorious for the presence of triads, gamblers, prostitutes, drug dealers and unlicensed dentists.

Nonetheless, the residents built a close and peaceful community. They had a life of their own, which was very different from the rest of Hong Kong. Within the Kowloon Walled City, there were schools, temples, dentists, restaurants, nursery, factories and production facilities. There was also an informal but extensive network of staircases and passageways, such that one could move around the entire city without ever touching solid ground.

Quite frankly, I did not know how to feel about these findings. Random thoughts went through my mind, dwelling particularly on the strong survival skills of these people. Despite poor living conditions, these people lived on. What gave them the strength?

Perhaps, as how one ex-resident sums it up brilliantly, “People who lived there were always loyal to each other. In the Walled City, the sunshine always followed the rain.”

To find out more, these articles are worth reading:

The videos below help to put to words into perspective.

How to get to Kowloon Walled City