A journey to Hong Kong is incomplete without a trip to Victoria Peak, one of the most popular tourist attraction in Hong Kong. Standing at 552 metres above sea level, Victoria Peak is the highest mountain on Hong Kong island, offering a breathtaking awe-inspiring view of Hong Kong. In this travel guide, we share with you some interesting stories on Victoria Peak, how to get there, as well as our step-by-step guide for the best (and free) view from the top!

Before the Opium War, Hong Kong was haunted by pirates. These pirates would raise their flag of skull and skeleton on the Victoria Peak and demand merchant ships to surrender large amount of treasure. Hence, the locals refer to Victoria Peak as the Mountain of the Hoisted Flag, Tse Ki Shan. The most famous pirate was known as Cheung Po Tsai. Eventually, Cheung Po Tsai worked hand-in-hand with the Qing Dynasty and brought peace to the area. As a result, gone were the days when pirate flags were hoisted on Victoria Peak. The official Chinese name of Victoria Peak became the Mountain of Great Peace, Tai Ping Shan.

Victoria Peak is also known as Mount Austin. Today, we named it after Queen Victoria. This goes back to Hong Kong’s history, when the First Opium War started in 1840. The war finally ended in August 1842, with the signing of China’s first unequal treaty, the Treaty of Nanking. In essence, the Qing government ceded Hong Kong island to the British, which was under reign of Queen Victoria.

Back then, British colonies developed hill-stations, wherever possible, as a refuge from the lowland heat and the tropical diseases that claimed so many lives. In spite of its small size, Hong Kong was no exception. Victoria Peak used to be a natural signalling post for incoming cargo ships in the 19th Century. In time, the more privileged early residents, such as our governors, found the Peak District to be the perfect retreat from Hong Kong summer heat.

How to Get to Victoria Peak in Hong Kong

Today, Victoria Peak is world-famous for offering fabulous panoramic views of Hong Kong. There are many ways to get to Victoria Peak.

By the Peak Tram: The most popular option is to catch the Peak Tram from the Lower Terminus. The Peak Tram operates from 7am to 12 midnight and it takes only seven minutes to get to the top. Provided that the waiting line is short, this is the quickest way to get to Victoria Peak.

More often than not, the queue for Peak Tram at the Lower Terminus is terribly long, sometimes up to 2 hours! This is partially because travel agents with big tour groups typically have priority access to the Peak Tram. Consequently, the wait becomes frustrating. Our tip is to give the upward tram ride a miss and use the Peak Tram for the return trip instead. The waiting line for Peak Tram at the Upper Terminus is usually shorter, as most of these big tour groups would head back to the city by coach buses.

Alternatively, try taking a taxi or a bus to Victoria Peak!

By Taxi: Taxi drivers should go strictly by the meter in Hong Kong. A taxi ride from Central to Victoria Peak takes around 20 minutes and the taxi fare is around HK$100. 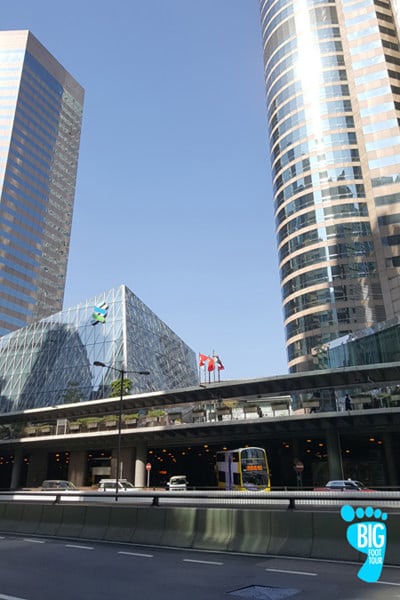 Right outside Central Station – Exit A, take the upward escalator and cross the foot bridge. Thereafter, keep a lookout for the Central Bus Terminus sign. 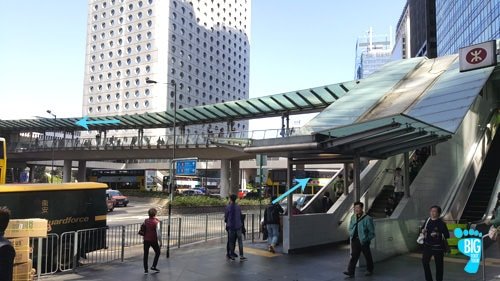 In due time, you’ll find yourself at the junction shown below. Turn right straightaway and you will find an escalator that leads to the Central Bus Terminus. Don’t miss it! 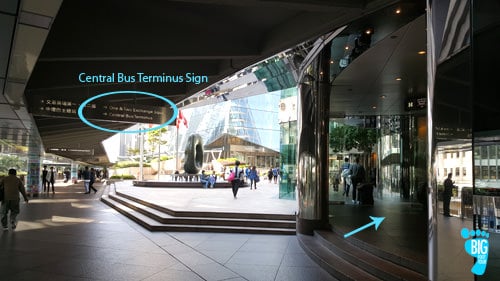 At this instance, make your way down to Central Bus Terminus. 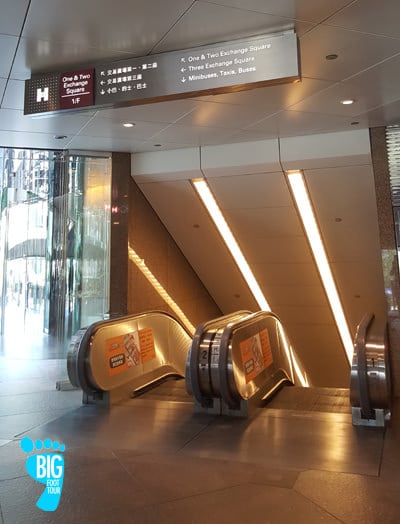 Now, look for Bus 15. On average, there are buses every 10-15 minutes. At the moment, the fare is HK$9.80 for Adults and HK$4.90 for Child or Senior. You can pay with your Octopus card by simply scanning the card as you board the bus. Otherwise, please prepare exact fare because no change will be given. For the purpose of having the best view during the bus ride, we suggest heading up to the Upper Deck and grab the front row seat on the left side. Another key point to remember, please buckle up your seat belts. The bus moves crazily fast! 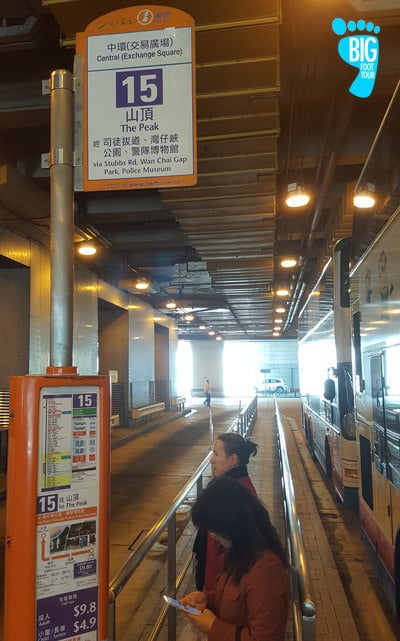 Generally speaking and depending on the traffic, the bus ride takes around 40 minutes. Don’t worry about missing a stop because Victoria Peak is the terminus station. As such, once the bus driver switches off the engine, you have arrived at Victoria Peak. Time to alight!

At Victoria Peak, you’ll notice a gigantic structure, which looks like a bowl and a pair of chopsticks to most Chinese. That is the Peak Tower, where you will find Madame Tussaud’s Museum, Upper Terminus of Peak Tram (where you can buy tickets for the Peak Tram ride back to the Lower Terminus, or simply use your Octopus card!) and Sky Terrace 428.

Standing at 428 metres above sea level, Sky Terrace 428 is the highest 360 degrees viewing terrace in town. You’ll need to purchase a ticket to enter Sky Terrace 428. For more information on ticket prices, please refer to The Peak.

Alternatively, we say, take a short 15-minutes walk and head straight to our SECRET SPOT! In our opinion, this spot offers a much more magnificent view of Hong Kong’s charming skyline and the best part? It’s free of charge! 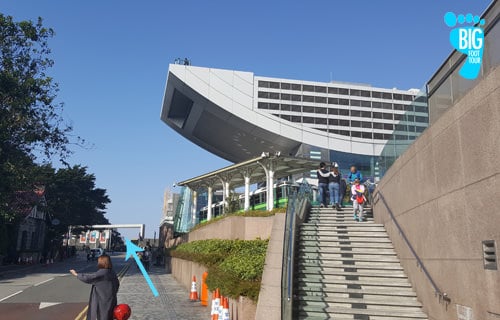 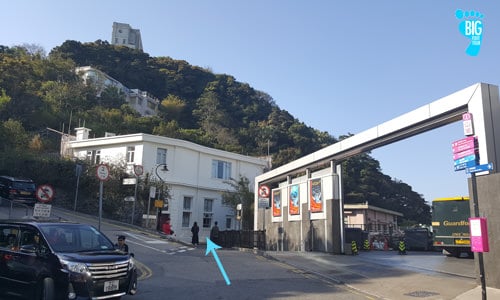 Lugard Road. You are on the right track! 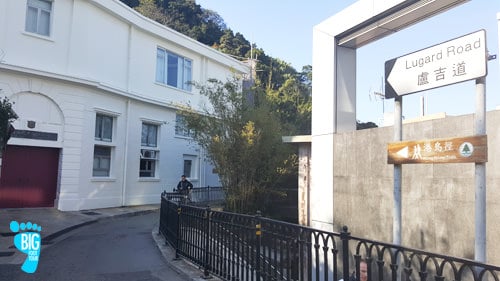 The tracks are well-paved and perfect for an easy stroll. For this reason, this scenic path is a popular trail for joggers who love a quick getaway from the buzz of the city. 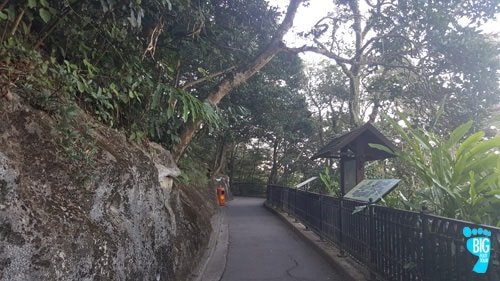 From here on, follow the path. There’s no need for any deviation. 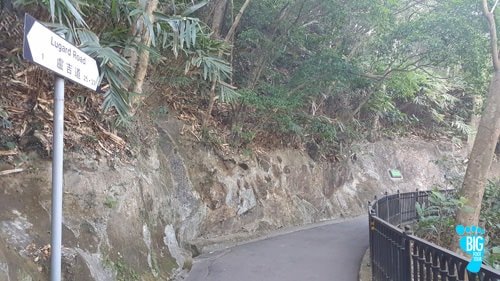 Continue to stay on the right lane. Keep going! 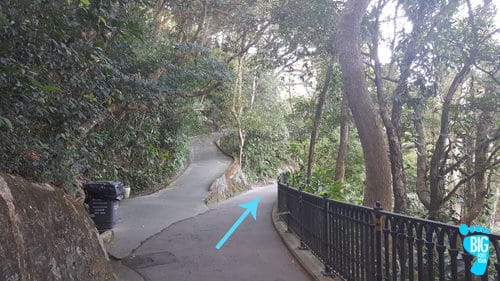 Similarly, keep right. At this point, you are only a few minutes away! 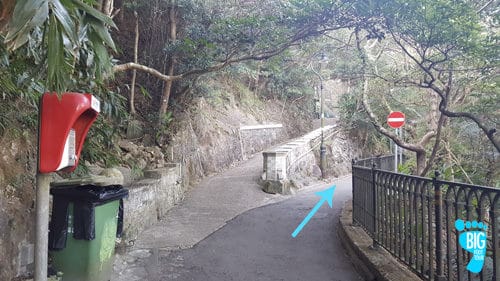 In due time, you’ll arrive at this spot where it seems to be THE place. Well… Not yet! Remember, we want you to have the best view from Victoria Peak. With this in mind, walk further up! 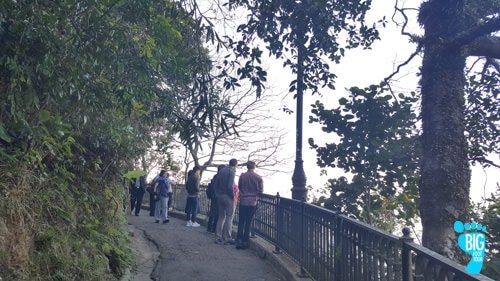 Here we are! There is no obstruction, but just a sight to behold! 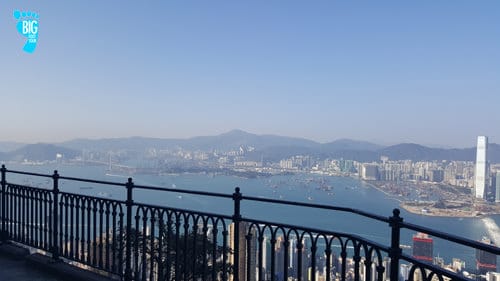 An awesome view of Western Hong Kong from Victoria Peak. Take as much pictures as you wish! 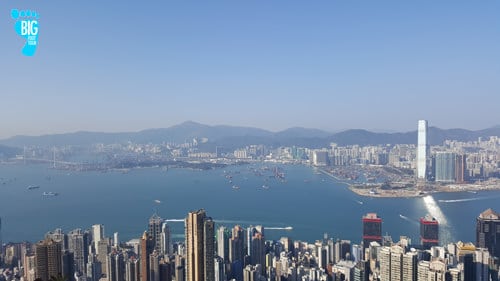 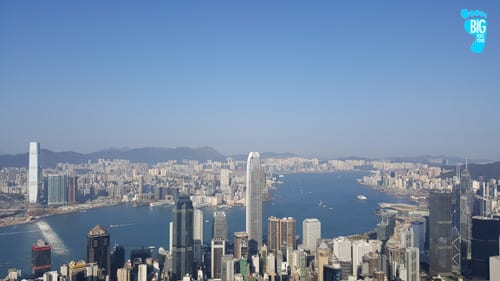 How about a Panorama shot?

We hope you have enjoyed this step-by-step guide to Victoria Peak. For more local insights or tips and tricks to maximise your time in Hong Kong, book a Big Foot Tour with us today. We offer 3 kinds of private tours (Real Hong Kong Tour, Hong Kong Food Tour, Hong Kong Private Tour), each of which comes with many great opportunities to explore the city like a local. Check us out now!